March 2020 was a historical month in many aspects, and we all learned a valuable lesson provided by the debt-fueled economy.

After a correction in the second half of February, the crypto market rebounded slightly in the first week of March with a gain of 7.4%. However, when the stock markets started to crumble in the following days, the crypto market downright collapsed. The S&P 500 recorded its quickest bear market ever and lost 9.5% on 12 March alone. In the course of 15 hours, Bitcoin and other crypto assets lost a staggering 50% of their value. The sell-off was caused by extremely high levels of leverage in the crypto ecosystem (more on the topic below).

The crypto market strongly rebounded in the aftermath of the sell-off, gaining 45% in less than two hours. After two days of “off the charts” volatility, the prices started to stabilize, and the market continued with gradual recovery. March 2020 will go down in the record as one of the most volatile months in crypto’s short history, as well as one of the worst-performing with a return of -32.7%. 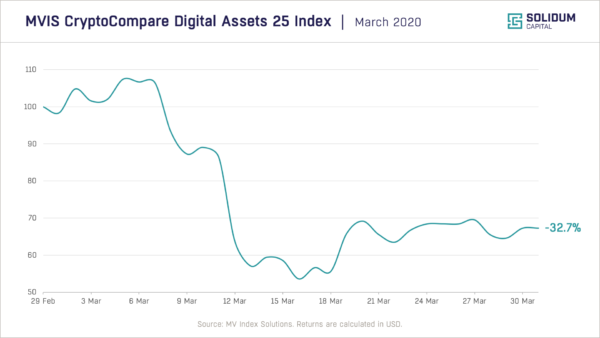 The altcoins continued to exhibit higher volatility than Bitcoin. The “best” performers of the top 25 altcoins by market cap were Dogecoin (-19%), Bitcoin SV (-22%), and Dash (-24%). Many altcoins lost between 30% and 50%, while Bitcoin lost 25%. However, Bitcoin dominance increased only marginally and ended the month at 65.0%. 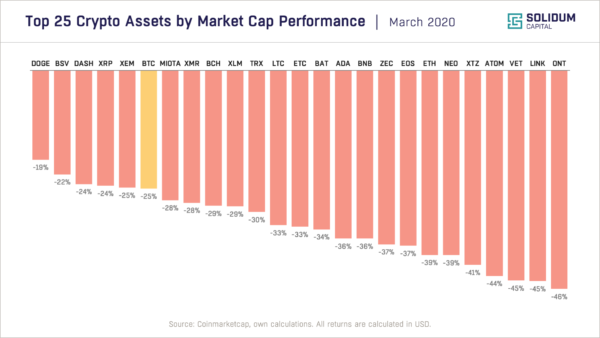 Leverage by itself is not a bad thing, but excessive amounts of it can cause a lot of harm. Many markets recently experienced this consequence, including crypto. In the traditional financial markets, the amount of leverage is usually limited to 2x or 3x, whereas in the crypto market, some exchanges offer up to 125x leverage. The amount of leverage in the crypto ecosystem has grown significantly over the last year, and the cumulative size of all Bitcoin leveraged contracts on exchanges peaked at $5.4 billion on 14 February, 2020.

When Bitcoin’s price started collapsing on 12 March, it led to initial liquidations, which forced levered investors to sell their collateral. This pushed the price lower and led to more liquidations and additional losses. In a period of 15 hours, $1.8 billion of leveraged positions were liquidated. Considering the fact that the actual Bitcoin trading volume is less than 5% of the reported volume, it had a massive negative impact on Bitcoin’s price. Over the course of one month, $3.6 billion of Bitcoin leveraged positions were wiped out, leading one to question the value of the enormous leverage offered by many leading exchanges.

While the capital injections from central banks and governmental stimulus packages have provided short-term support for the global markets, I believe they will prolong the path to recovery and inflict more damage to the global economy.

It remains to be seen if the crypto market will be able to decouple from the stock market’s action in the coming months. In my opinion, the potential downside in the crypto market is limited this time due to the significantly reduced levels of leverage and record levels of cash sitting at the exchanges ($1.9 billion USDT), waiting to enter the market.