The crypto market exploded in the first year of the month with many assets recording double digit gains.

2020 started with a bang as the crypto market gained 50.5% in January. There were two major catalysts for the rally: the assassination of an Iranian general by the USA and the coronavirus outbreak. I will write more about the impact of both events on crypto prices later. However, it would be imprudent to believe that the crypto market rallied only because of these two events. There were also some important technical factors (like Bitcoin breaking out of its six-month downtrend channel) and strengthening fundamentals (like the Bitcoin hash rate increasing 18% in January). 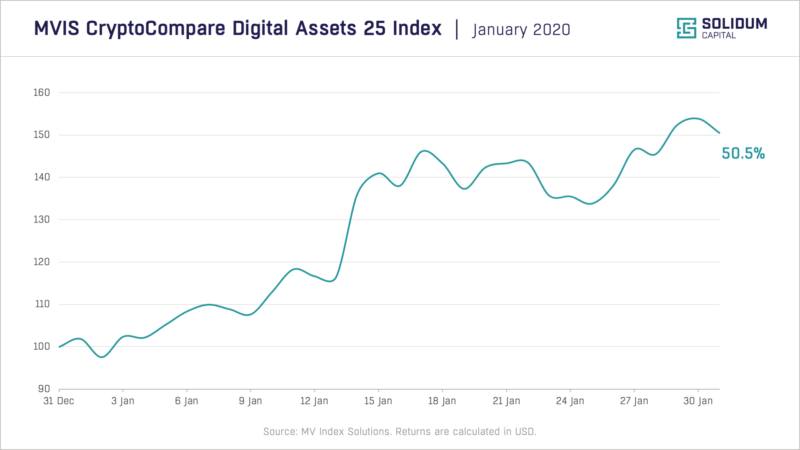 While Bitcoin gained 30%, many altcoins prices exploded. The top three performers of the month were Dash (183%), Bitcoin SV (181%) and Ethereum Classic (151%). All top 25 crypto assets by market cap recorded positive performance in January. As a result, Bitcoin dominance decreased to 66.1% at the end of the month. 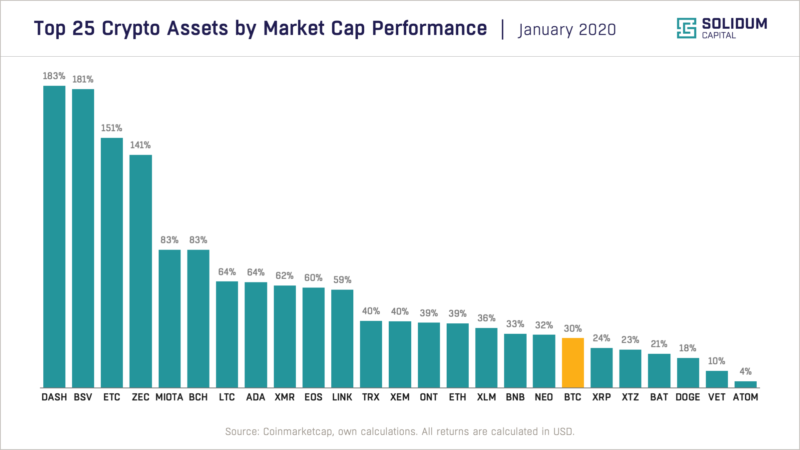 Bitcoin as a safe haven

Two events in January confirmed the “Bitcoin is a safe haven” thesis and positively affected the crypto prices. Immediately after the US attack in Iraq on 3 January, which resulted in the death of an Iranian general and several other people, the price of Bitcoin skyrocketed. As the US-Iran tensions mounted, its price increased by 22% in just three days. After the Iranian foreign minister and the US president posted tweets signaling de-escalation of the conflict, the price of Bitcoin pulled back.

The coronavirus outbreak is intensifying and starting to affect global businesses and stock prices. On 24 January, Starbucks and McDonald’s announced they will shut down their stores in China’s Hubei province. Airlines started suspending flights to/from China, and cruise operators suspended cruises to China. As the outbreak continues to spread across the globe, the price of Bitcoin and other cryptocurrencies continues to increase.

It is far too early to conclude that Bitcoin is perceived as a safe haven among investors, but if its price continues to react positively in periods of heightened risk, more people will start recognizing it as such. 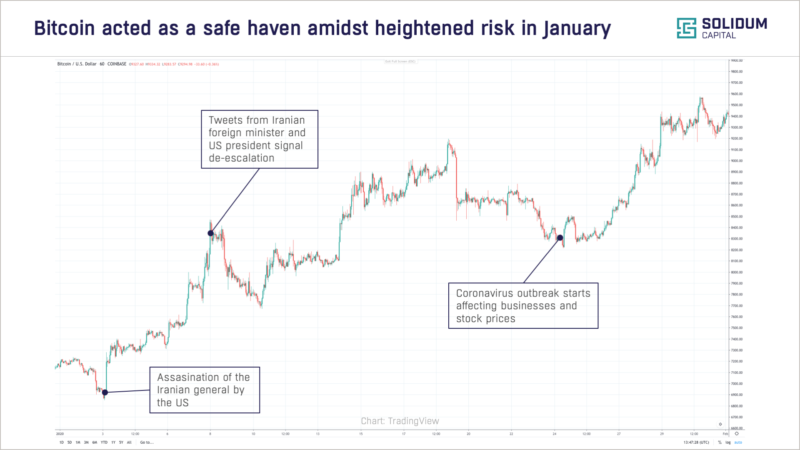 It is entertaining to observe how fast times can change. Only two years ago, many banks and regulators stated that cryptocurrencies have no real use case and value. Some even ridiculed them, and many predicted that “this experiment would ultimately fail.” Today, an increasing number of countries are rushing to develop their central bank digital currencies (CBDC).

Several weeks ago, the Bank for International Settlements published a report which shows that central banks are undertaking extensive work on CBDCs. Central banks representing a fifth of the world’s population say they are likely to issue the first CBDCs in the next few years.

Deutsche Bank also published a report titled “Digital Currencies: the Ultimate Hard Power Tool,” where it states that a new digital currency could become mainstream within the next two years. At their annual meeting in Davos, the World Economic Forum (WEF) has created an international consortium to design a governance framework for cryptocurrencies. These developments are closing the mouths of even the largest crypto sceptics.

Crypto infrastructure is developing at a rapid pace

As the crypto market continues to recover from the colossal bear market of 2018, more fiat to crypto gateways and other infrastructure is being built. Some of the developments in January:

These developments are strengthening crypto fundamentals and use cases which will help crypto prices continue ascending towards their all-time highs.

After such a strong rally in January, we can expect the market to cool down for a while. However, I firmly believe we are in a bull market and therefore perceive any pullback as an opportunity to increase long positions.