August marked the second consecutive month of negative returns but we can expect things to heat up in the autumn.

In August, the market continued with the correction. Initially, the market rebounded for 7.7% but afterward, prices gradually decreased until the end of the month. In August, we recorded a second consecutive month of losses for the crypto market, with a negative return of -18.1%. 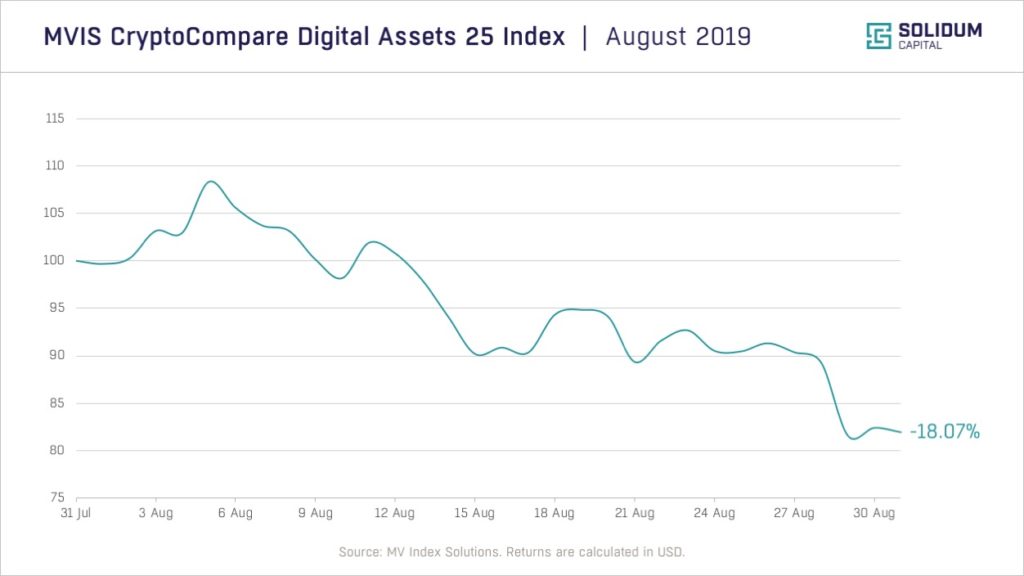 Bitcoin lost 6% in August while the top 24 altcoins by market capitalizaton lost between 11.6% and 39.9%. Ethereum Classic was the only exception with a positive performance of 4.8%. One of the reasons for its price increase could be the upcoming hard fork, scheduled for 13 September 2019.

Bitcoin has again proven to be the most resilient asset during the downturns. From its recent high, reached on 26 June, Bitcoin lost 30% of its value while the altcoins depreciated by 50% (measured by the Bitwise 20 Mid Cap Crypto Index) in the same period. 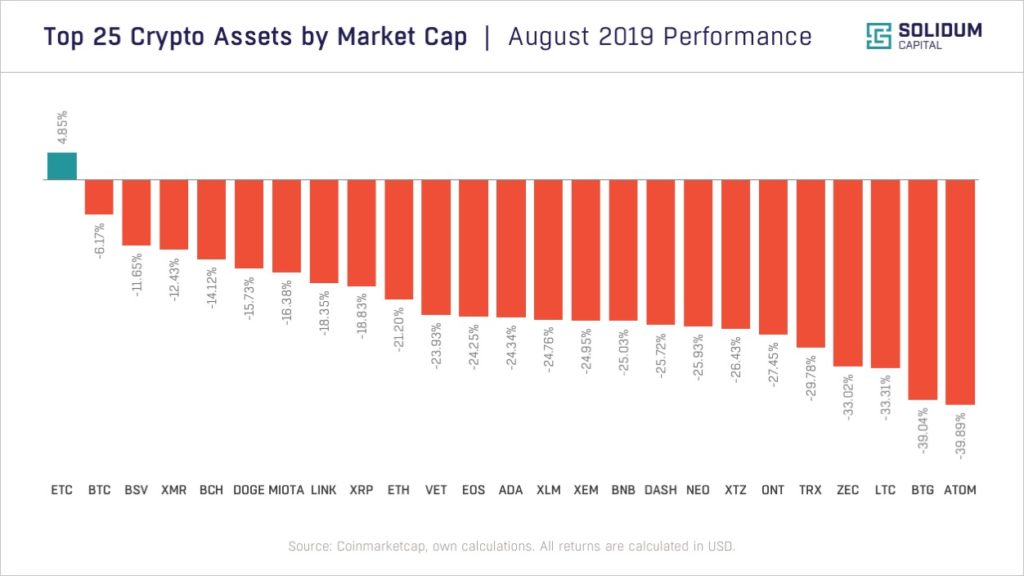 Bakkt launch and its importance for the crypto ecosystem

After several delays, Bakkt will finally start offering Bitcoin futures on 23 September 2019 which will undoubtedly turn out as one of the most important events in the crypto ecosystem this year. It will mark the first time that a company will enable the physical delivery of Bitcoin with end-to-end regulated markets and custody. Bakkt is not “yet another player“ on the market, it was founded by the Intercontinental Exchange (ICE) in 2018 and was backed with $182 million by Microsoft, Starbucks, Boston Consulting Group, and several other prominent companies.

Bakkt’s main advantage over its competitors is indeed its founder: ICE is the owner of the New York Stock Exchange, the world’s far and wide largest stock exchange. ICE also owns eleven other exchanges for financial and commodity markets and six central clearing houses across the globe. ICE and its companies are financially backed by all major US and European banks, and literally every relevant institutional investor in the world is doing business with ICE or one of its companies.

ICE has a superb long-term business track record and has earned the trust of the traditional financial industry. It has the largest list of financial, as well as non-financial, clients in the world. When these investors decide to buy Bitcoin, they will require to do business with someone they already know and trust. Hence, they will choose Bakkt.

That being said, I don’t expect Bitcoin’s price to shoot straight to the moon on 23 September but Bakkt’s entrance to the market will undeniably have a significant impact on the Bitcoin demand in the coming months and years.

Crypto adoption is entering the next phase

General interest in the crypto ecosystem started to grow rapidly during the ICO boom in 2017. However, back then, the majority of the traditional business world, investment world, and regulators still found themselves in a denial phase. They would often state that cryptocurrencies had no real use case and value. Some even ridiculed the crypto and many predicted that “this experiment would ultimately fail”.

Fast forward to August 2019: China’s central bank representative announced that China is almost ready to launch its own sovereign digital currency. The Bank of England governor, Mark Carney, stated at the annual meeting of central bankers that the US dollar was too dominant as the world’s reserve currency and suggested that it could be replaced by a new global digital currency, backed by a large group of nations.

In recent months, various companies, financial institutions, and even central banks across the world have announced that they would start exploring the possibility of issuing their own cryptocurrencies. All of these are the clear signs that the corporate world is moving from the denial to an acceptance phase regarding the crypto.

The crypto market is still in the correction and consolidation phase and we can still see a few additional weeks of sideways movements. A longer consolidation is normal after such a massive spike in prices that we had witnessed in the first half of 2019. Now is the time to be patient and, in case you have forgotten, this is just a breather before the next leg up.