December marked the third consecutive month of positive returns for the crypto market. The month started with a minor correction and lost 11.7% in the first 11 days. A nice uptrend followed this, and the month ended with a positive performance of 9.9%.

In total, 16 of the top 25 crypto assets by market capitalization posted gains in December, and the top three performers were THETA (+190%), Polkadot (+73%), and Bitcoin (+48%). By the end of the month, the Solidum Cautus portfolio was composed of only two assets, Bitcoin and Polkadot, two of the best-performing assets in December, which greatly contributed to the overall monthly performance of the portfolio. Bitcoin reclaimed the spotlight in December and outperformed the majority of altcoins. Consequently, its dominance also increased to 71%.

The Solidum Cautus portfolio outperformed the market in December. The portfolio recorded a positive monthly performance of 19.93%, whereas, as mentioned above, the market posted a 9.92% gain during the previous month. 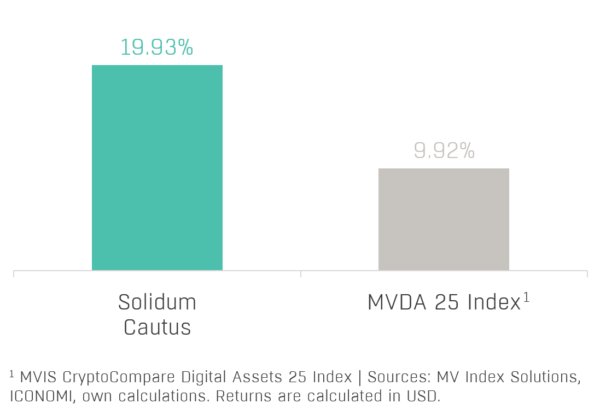