Bitcoin tested critical levels during November. Following the October rally, Bitcoin consolidated for the first week, fluctuating between $9,138 and $9,437. On 8 November, however, BTC experienced a substantial daily loss of -5.29%, consequently losing its $9,000 support level. On the same day, the Solidum Bitcoin Momentum strategy generated a signal to reallocate the portfolio completely in stablecoins.

During the next 10 days, Bitcoin gradually declined by an additional -5.62%, finding its support around the $8,550 price mark. On the 18th, a strong selling volume pressured Bitcoin to test lower price levels, and after two days, Bitcoin lost its $8,000 support level. By the end of the 25th, Bitcoin marked its lowest monthly price point of $6,617. In the last week of November, Bitcoin managed to recover some of its previous losses, securing itself above the $7,500 price level and ending the month at $7,569.

Nevertheless, Bitcoin recorded a monthly loss of -17.72% in November. Conversely, on 10 November, Solidum Bitcoin Momentum Strategy allocated the total portfolio in stablecoins, thus hedging against all market losses that followed in the second half of November.

Solidum Bitcoin Momentum Strategy performed substantially better compared to the overall crypto market and Bitcoin in November. The crypto market reported a negative monthly performance of -16.1%. Moreover, Bitcoin underperformed the market in November, ending the month with a -17.72% loss. On the other hand, Solidum Bitcoin Momentum Strategy mitigated market losses to a bare minimum, recording a marginal loss of -1.15% in November. 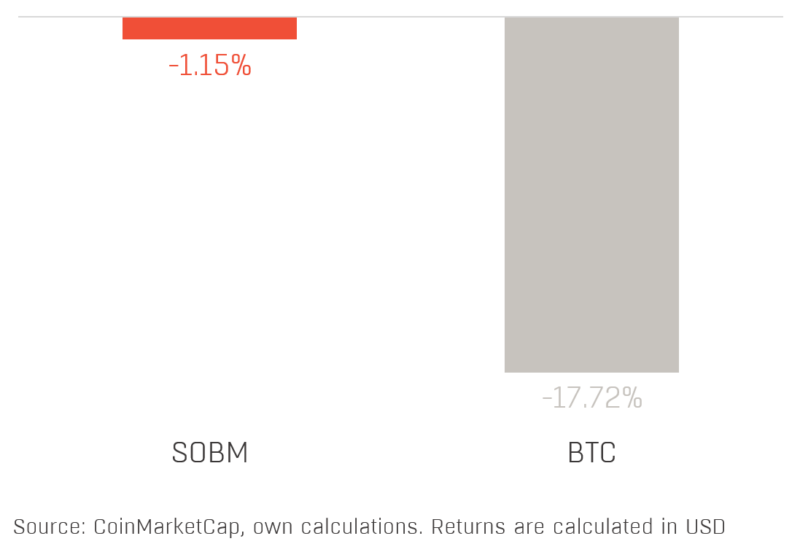 Solidum Bitcoin Momentum Strategy generated five trading signals in total during November. All five signals were generated in the first 10 days of the month when Bitcoin displayed great uncertainty whether it would continue its bullish trend or retract back to lower levels. Due to the skepticism in the market, the Investment Committee decided not to act on a trade since it did not exhibit the same signal for three consecutive days. Consequently, only one trade was made during November. By not exercising the other four signals, the Investment Committee effectively avoided additional trading costs that the portfolio would incur if the trades would have been exercised. The strategy started the month off with half the portfolio invested in Bitcoin and the other half in stablecoin. On 10 November, following the trading signal, the portfolio was completely reallocated to stablecoins and retained the same structure throughout the month.