After a volatile price action in the first four months of 2020, the market has been without a clear direction. It gained 8.4% in May, then lost 7.0% in June, delivering a flat performance of 0.8% over the last two months.

Bitcoin is consolidating in the range between $8,900 and $9,900, with occasional fake breakouts on both sides, causing headaches to many traders. Once the actual breakout finally occurs, we can expect a decisive move on either side. By the end of the month, Bitcoin represented 64.8% dominance of the total market capitalisation, which is 0.7% less than the month prior.

The Solidum Bitcoin Momentum strategy underperformed BTC in the previous month. The strategy recorded a negative monthly performance of -20.70%, whereas Bitcoin ended the month with a loss of -3.41%. 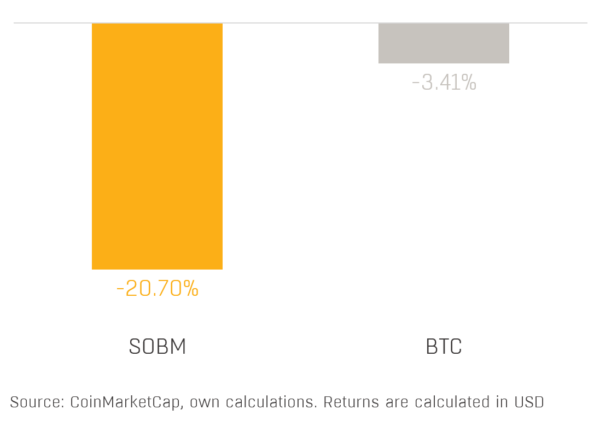 While it’s impossible to predict future price movements, the market’s trajectory indicates a short-term consolidation period for Bitcoin. However, as we have experienced many times in the past, a fast breakout in either direction is also probable. For the strategy to maximize its return potential, a clear momentum is required, and we believe once Bitcoin breaks through the range, where it has been fluctuating for the past several weeks, the strategy will once again outperform BTC and its peers.