After all the fireworks we sparked for New Years, the crypto market was preparing for its own rocket launch in January. The market recorded a blasting 50.5% in the past month and all of the top 25 crypto assets by market cap experienced a positive return in January.

Bitcoin continued to appreciate throughout January. Starting the month at a price of $7,180, Bitcoin broke past the $8,000 price level in the first week. In the second week, BTC continued its upward trendline, and on the 19 January, it surged past the $9,000 price mark. Thereafter, it consolidated between $8,300 and $8,600 for ten days, without showing any clear direction. However, on the 28 January, Bitcoin again reestablished itself above the $9,000 threshold and ended the month at $9,350.

The Solidum Bitcoin Momentum strategy generated several signals during January. Following the descending trendline from December, the Investment Committee was skeptical to invest in the market at the first “Buy” signal. The decision was made to invest more conservatively with half of the portfolio invested in Bitcoin and the other in stablecoins, for the purposes of hedging against the downside risk. This position was maintained until the second half of the month. However, during this time, Bitcoin had already realized a 22.60% return. While trying to protect against a sudden downturn of the market, we missed out on capitalizing the outstanding gains Bitcoin made during this time. On 14 January, the Investment Committee decided to fully expose the portfolio and invest 100% in Bitcoin. On 28 January, once Bitcoin reaffirmed the $9,000 price level, the Investment Committee decided to increase the position to 150% (1.5x leverage). 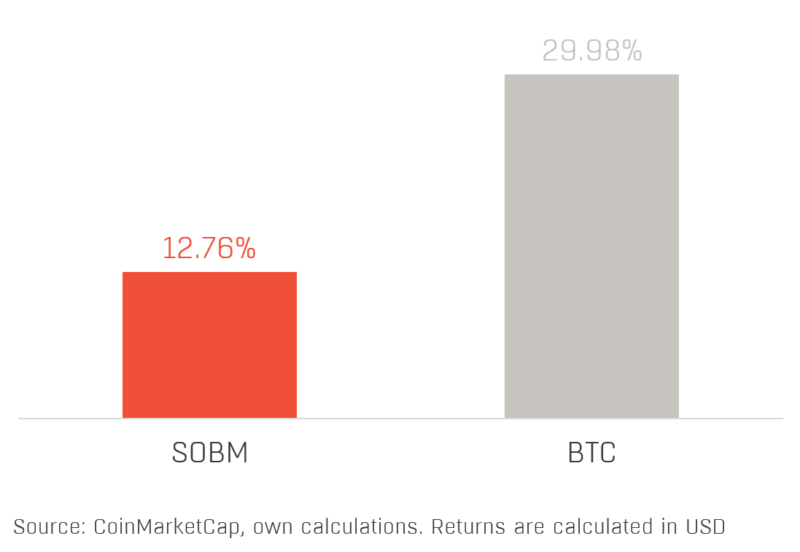