During the first two and a half weeks, Bitcoin’s price fluctuated between $11,050 and $11,950, with no decisive breakouts on either side. On 17 August, however, Bitcoin swiftly broke through the $12,000 resistance level and managed to hit its yearly-high of $12,360. Nevertheless, the $12k breakthrough was short-sighted, as sell orders pushed BTC to lose 9% over the course of the next 10 days. Thereafter, Bitcoin started to gradually recover, reaching a price point of $11,700 by the end of the month.

Altcoins continues to strongly outperform Bitcoin, which gained 3.16% in August. Bitcoin also represented 57.3% of the total cryptocurrency market capitalization by the end of the month, down from 62.4% a month ago.

The Solidum Bitcoin Momentum Strategy slightly underperformed Bitcoin in the previous month. The strategy recorded a loss of 3.33%, whereas Bitcoin ended the month with a gain of 3.16%. 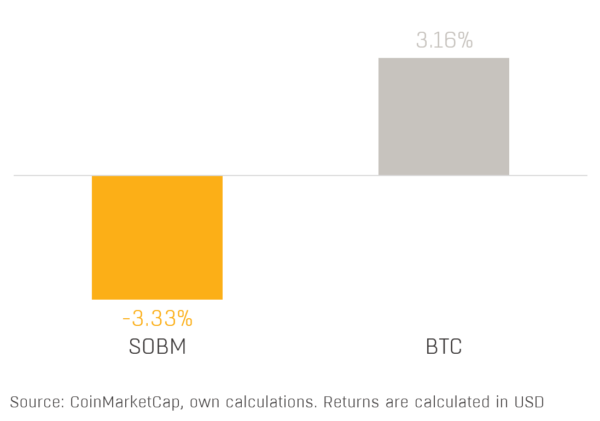