In April, Bitcoin experienced a steady price appreciation throughout the month. Bitcoin started the month at $6,438 and managed to climb above the $7,000 price mark by the end of the first week. During that time, the Solidum Bitcoin Momentum Strategy maintained a 50% exposure to the market, which was set in March. Thereafter followed a two-week consolidation phase during which time the portfolio structure remained the same.

However, by the end of the second week, the strategy generated a strong buy signal, and therefore, on April 27, the Investment Committee decided to increase the portfolio exposure to 200%, utilizing leverage to increase potential returns. In the following three days, Bitcoin managed to appreciate by an additional 11.07% and the Solidum Bitcoin Momentum Strategy ended the month with an exceptional monthly performance of +38.91%.

Therefore, the strategy performed better compared to Bitcoin in April, as BTC ended the month with a gain of +34.48%. If we take a look at a longer timeframe, the Solidum Bitcoin Momentum Strategy recorded a +49.30% return in the past three months, whereas Bitcoin recorded a negative performance of -7.40% during the same time. In the past six months, the strategy also strongly outperformed Bitcoin, with a gain of +50.16%, whereas during the past six months, Bitcoin recorded a return of  -5.88%. 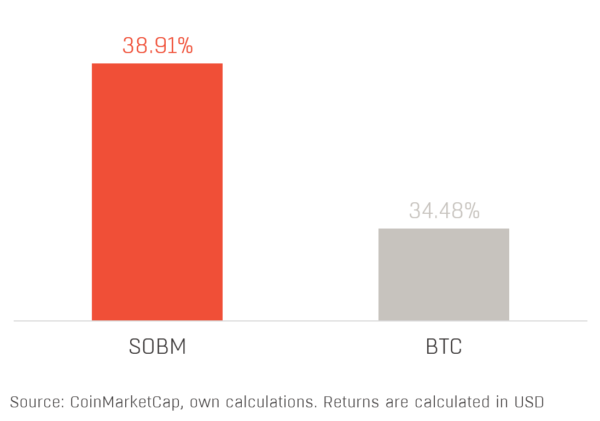